Total Joint Replacement surgeries were impacted by Covid-19. There is an estimated decline in these types of surgeries in 2020 of 12.1%, not because the need was not there. The medical world was otherwise occupied.

Technology is amazing in every field, but especially the field of orthopedic surgery. This was not an overnight occurrence, the severity of joint pain has led to many experimental surgeries to replace worn out, painful joints. First ever orthopedic prostheses and implants were found in Egyptian mummies dating back to over 3000 years ago!

Because of arthritis and injuries, our joints tend to get irreversibly damaged, leaving us with limited mobility and in pain. More than a million Americans have joint replacement surgery every year. Thanks to technology in medicine, there is no need to suffer in pain and reduced mobility. It is time to get back to enjoying life.

The knee is the largest joint in the body and having healthy knees is required to perform most everyday activities. The most common cause of chronic knee pain and disability is arthritis. Although there are many types of arthritis, most knee pain is caused by just three types: osteoarthritis, rheumatoid arthritis, and post-traumatic arthritis. Nearly 1/2 of American adults will develop knee osteoarthritis in at least one knee in their lifetime.

The production of the total knee arthroplasty began way back in the early 1860s. A German surgeon first surgically implanted a hinge joint made of iron. It was not until 1951 that an acrylic hinge joint was introduced, then switching to cobalt and chrome in 1958. In the 1960s, a metal-on-polyethylene total hip arthroplasty was introduced, which inspired elements of total knee replacement. In 1968, the first-ever total knee replacement surgery was completed.

Since then, there have been continued efforts in perfecting sizing, better instrumentation, better range, and the option of patella-femoral replacement. The degree of invasiveness has changed drastically, and the recovery time has as well. In many cases, a hospital stay is no longer necessary, and surgery can be performed in an outpatient facility. More than 90% of people who have knee replacement surgery experience a dramatic reduction in knee pain.

When the hip joint is exposed to injury or arthritis, the layer of protective cartilage that lines it becomes damaged, causing extreme pain. Hip joint is a ball and socket joint, which connects our legs to the body. It is a weight bearing joint, taking the entire load of our body. 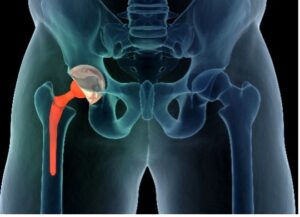 The earliest recorded attempts at hip replacement occurred in Germany in 1891. Extensive research began over a century ago to explore the possibility of hip replacement.

Different versions of hip arthroplasty had advantages and disadvantages. Metal-on-metal, ceramic-on-ceramic, and metal-on-polyethylene all had their pros and cons. Hybrid hips and cementless hips were experimented with. Throughout the years, the surgery has become much less invasive and, using computer assisted surgery improves accuracy. A combination of conventional surgical technique, computerized navigation and CT scan-based customization has resulted in the latest “Robotic” technology for joint replacements.

450,000 hip replacements are performed in the United States each year. According to the Arthritis Foundation, it was estimated that over 78 million people in the U.S. who are 18 years of age or above are anticipated to be diagnosed with arthritis by 2040.

Also a ball-and-socket joint, the shoulder allows your arm to move up and down, forward, and backward and in a circular motion. Ligaments connect the bones, while the tendons connect muscles to the bone. Cartilage keeps the bones apart, so they do not rub against each other.

Although less common than hip or knee replacements, more than 50,000 shoulder replacements are done in the U.S. each year. 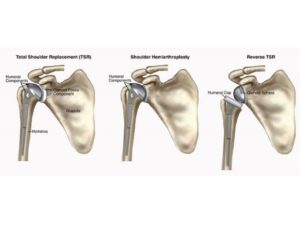 Because the shoulder is not weight bearing, the recovery time is much less. Most patients go home the same day and physical therapy will be needed.

Not sure if you are a candidate for joint replacement? Dr. Marshall P. Allegra is a board-certified orthopedic surgeon in private practice in Monmouth County for over 25 years. As an experienced diagnostician, Dr. Allegra can expertly determine your bone health, injuries, and then determine the best treatment options to boost your normal life, restore functionality and range of motion as quickly as possible and avoid long term implications.