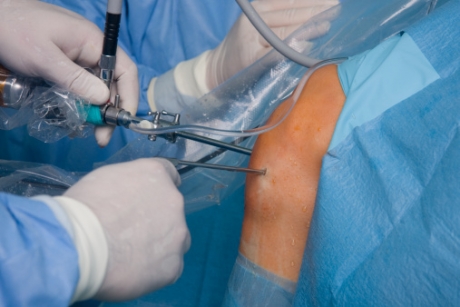 In 1988, Dr. J. Barry McKernan, after making only a 10mm incision – (equivalent to 0.39 inches, less than half an inch) – inserted a miniature camera into a patient’s abdomen and removed a gall bladder. The patient recovered in days, rather than weeks or months. This was the first laparoscopic cholecystectomy performed in the U.S. and the beginning of the minimally invasive movement in surgery.

An orthopedic doctor may recommend minimally invasive surgery for many conditions, including orthopedic injuries and disorders.

Minimally invasive laparoscopic surgery uses state-of-the-art technology to reduce damage to human tissue when performing surgery. For example, in most procedures, a surgeon makes several small incisions and inserts thin tubes called trocars. Carbon dioxide gas may be used to inflate the area, creating a space between the internal organs and the skin. Then the miniature camera (usually a laparoscope or endoscope) is placed through one of the trocars so the surgical team can view the procedure as a magnified image on video monitors in the operating room. Specialized instruments are placed through the other trocars to perform the procedures.

There are some advanced minimally invasive surgical procedures that can be performed almost exclusively through a single point of entry – meaning only one small incision. This is called single site laparoscopy, and is another approach to performing traditional laparoscopic surgery using the same tools. Orthopedic surgeons often perform single site laparoscopy to repair conditions of the hip and knee. These kinds of procedures are not for everyone, and only your doctor can determine if a minimally invasive surgery is right for you.